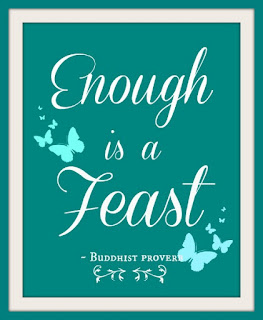 I struggle a lot with appreciating what I have. Someone who is constantly asking "what if" statements and fantasizing about living in a different place, surrounded by different people, doing different things than the standard mundane Monday through Friday parade of mediocrity that I've come to know. Of course, most people are like me and take what things we do have for granted and instead focus on what we want, what we don't have. The truth is that the human condition by nature makes us feel forever unsatisfied, wanting bigger, better, brighter at all times.

Recently, I've been pulling myself off of all substances. No recreational smoke, no nicotine, not even caffeine. I still have the occasional glass of wine and my only caffeine exception is a low caff tea (you can pry my white tea from my cold, dead fingers). Cutting back on sugar and related garbage carbs is forcing me to detox not just physically but mentally. In the morning, I don't reach for my blueberry Red Bull. Now I pass on a hit even though I want to escape the noise in my mind and ache in my bones. The overall goal of this whole ordeal is less about sobriety and more about clarity.

My body's doing just about as well as you'd expect when being deprived of all the chemicals that once kept me sane. I'm chronically tired, sore, irritable and depressed. The truth though is that I was already all of these things, the difference is that I was trying to cover up all these things before instead of actually working through them.

With my clarity, it's been affecting my sleep quality in a huge way and one of the more noticeable changes is my dream recollection. As long as I can spare five minutes immediately after waking, I can recall a great deal of what I dreamt about. Hand in hand with this, I have been trying to lucid dream once more. When I was younger, I was actually quite good at this and got to the point where I could control my dreams with ease. Last night, I had my first lucid dream in such a ridiculously long time and I took two major things away from it. First of all, my subconscious is a mess. I woke up sobbing uncontrollably and ran into the arms of my husband who attempted to console the hysterical woman who couldn't even say what was wrong for several minutes. Second of all, I need to be a lot more appreciative of what I do have.

To make a pretty long dream short, I was living a different life. In every aspect I have ever fantasized about my world being different, it was - I was more attractive, my entire family was present, I was about to publish my first book, my house was even cleaner. Yet everything that was good was gone as well - my mother and brother, who irritate the living fuck out of me sometimes but understand me in a way that no other people can because they have not experienced what we have, were absent. My husband (who, like me, was also more attractive and accomplished), betrayed and abandoned me, resulting in me being detained by the police. And there was no one to bail me out, no one to listen to my account of what happened, no one who cared. In the end, I was in front of the mirror, weeping because I knew that this was all a dream but I could not wake myself up no matter how I tried. Weirdly, praying to God that I wake in my bed to my normal life was what triggered me actually waking but that's a whole other can of worms.

Nothing quite like a drawn-out, sickeningly real, inescapable nightmare to make you realize that your life ain't so bad. After leaking out all the water my eyes could muster, I ended up hugging my mom for way too long and went for a drive to clear my head. Because I can do that now. I have a license. Just a sidenote. I am a totally normal adult and this is definitely something that is totally not a big deal to me or anything.

I'm working my way through the massive but immensely helpful The Anxiety and Phobia Workbook right now and there's a huge emphasis on positive self-talk. This, in my experience, goes hand in hand with the good ol' advice of "appreciate what you got". Yeah, I'm stuck in a town I don't really like and sure, I wish I was challenged creatively and intellectually more often. The little bit of family I do have drive me nuts and I'm not as skinny, pretty or healthy as I imagined myself being at this age when I was younger.

You know what though? At least my husband would never trick me into being a distraction for a cop so he could bum rush them, shoot them and leave me there alone. At least the friends I have are my friends because they like my personality and are willing to put up with my flakiness, my indecision and anxiety instead of suffering through all that just in the hopes of getting a mention in my writing or, even better, some of the cash from it. And while there's not a lot to do where I live, there are no bullets going through my neighbor's window. And sure, I get sick more often than most people, my allergies are pretty awful and I have at least one panic attack a week. But at least I can work, I don't need help taking care of myself and even though it's pretty hard to peel myself out of bed some days, I'm physically capable of doing it.

Spending my entire life up until this point thinking that nothing is ever enough may have pushed me from time to time to do better but mostly it just made me unhappy. You need a little desire to drive you to do greater things but more than that, you need an appreciation for the things you already have. After all, what's the point of working hard to get what you want if you're just going to stop wanting them once you have them? Want what you've got. Love who you have.
Posted by Carly Kaxt at 21:11