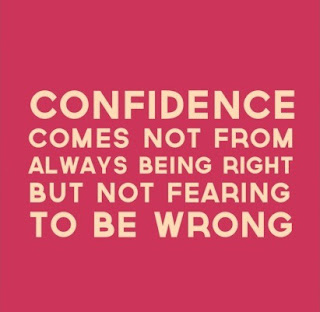 Everything is a matter of perspective. It's starting to get closer to winter and with the grey skies looming overhead and the temperatures dropping, my mind is already starting to distort everything. Reminding myself that there is more than one way to look at things is a constant battle - the never ending struggle between emotion and reason, optimism and pessimism, hope and dread.
This eternal fight applies to basically every aspect of my life but most specifically, I've been encountering it lately in regards to my self esteem. Skin picking (formally known as excoriation disorder), is a huge issue for me and a terrible vice that has recently gotten much worse now that I have no smokable things to occupy my fingers. It's kind of like that saying, idle hands are the devil's fuck shack. Or workshop. Close enough. Only difference is that instead of diddling myself (which would release endorphins and be way more productive), I'm tearing my goddamn flesh off.

Understandably, this is taking a bit of a toll on how I see myself. I straight up feel like Two-Face, looking pretty normal on one side and like the sort of monstrosity that parents cover their children's eyes for on the other side. Truth be told though, this is a pretty cyclical problem as feeling ugly ends up making me pick, which makes my skin look worse, which makes me feel gross so I pick some more and on and on until I'm literally slapping my hands until they're bright red, striking myself across the face as hard as I can force myself to do it in order to get myself to snap out of it and cut it the fuck out.

This is something I haven't really spoken about before because I never really considered this a "real" problem. After all, as long as I'm not too stressed out (or have other coping mechanisms, whether better or worse, to distract myself with), my picking doesn't really go beyond the occasional about-to-burst whitehead finding itself at the ends of my merciless fingertips. Despite being in my twenties, my acne hasn't really gotten any better than it was in high school. Honestly, I'm pretty sure it's worse now which makes me feel like I got kind of boned genetically speaking. Having a face spattered with zits is almost definitely to blame for why half the people I meet guestimate my age around 16 or 17. I know, impressive how puberty never seemed to end for me, isn't it? Here you go, sir, now please stop staring at my face before you realize I'm already forming wrinkles alongside my youthful, splotchy complexion.

See? It's tough to not just take a big steaming dump on myself. This is my general stream of consciousness, the constant negative narrative nagging at my soul. Sometimes, I can be very good about applying the appropriate countermeasures to this dismissive self talk. First, question the validity of these thoughts: is your acne really that bad? Do you really have wrinkles? The answer to these both is 'no'. My acne could be - and has been - worse. As for wrinkles, I don't know, maybe but nothing I've bothered to notice. Next, rebuttal with a positive thought: my skin is a nice tone and it compliments my hair nicely. Boom. Balance restored.

Doing this for every single bad thought that crosses my mind is the explanation for a lot of my silences. Also, it's utterly exhausting. Depending on the day, I just don't have the mental capacity to do it. I just let my natural instinct to talk shit about myself to myself go unchecked, causing a near-constant stream of self loathing to rattle in my skull.

All this makes me a pretty big hypocrite. I tell people all the time - embrace who you are! Be grateful for what you have! You are beautiful! There's only one you so you are unique and amazing and you MUST love yourself!! LOVE YOURSELF OR DIE, FIEND!!! Yet I can so rarely claim that I'm successful at any of this.

This goes more than skin deep, too. I am doubting myself constantly. I've read some about "imposters syndrome", some new Buzzfeed-esque idea that is making women across the nation comment on Facebook posts about. Whether or not this is a real issue isn't really relevant to me - feeling like you're "playing pretend" at being an adult is a very common sensation for people with borderline personality disorder. When I was younger, I never expected to live to see 18 and once I hit it, I feel like I never really let it sink in that I am, indeed, an "adult". This kind of makes sense when you consider that I was doing very adult-like things way before I turned 18 like writing checks for bills, managing the checkbook, doing the grocery shopping, making Thanksgiving dinner, working every summer, that sort of thing. I never had a curfew, discipline was nonexistent and since my mother was at work so often, I was frequently alone. So once it became official, it felt as if nothing had changed except the expectations of grown ups around me.

In terms of work, this makes me second guess any sort of praise or recognition I receive. Surely they're mistaken, or it's really just a matter of luck. I clearly do not have any skills and anyone who thinks so has simply been fooled by this very elaborate ruse I have been pulling for over a decade of working. When I sit down and think about it logically, of course I can see that the truth is I have a very high work ethic, a talent for connecting with people and an eye for details. However, no amount of proof can ever totally dismiss this unnerving feeling that one day the curtain will raise to reveal this has all been some sort of disturbing experiment or cruel joke. "You really thought you could do this?" they would laugh.

To quote the fantastic Marina Diamandis, "I feel like I'm the worst so I always act like I'm the best." This explains the flip side to my awful self image - in large groups, I'm generally rather gregarious and assume an attitude like I'm the fucking hottest shit that ever dropped out of another human being (sidenote: the Electra Heart album should perhaps be filed under "Songs for the Borderline" because many, many of the songs on there pinpoint very precisely a large number of different borderline "tropes" for lack of a better word). It's sort of like that theory that the people who laugh the hardest are often the saddest. Everyone's compensating for something.

So is there a solution to all this? It'd be nice to say I could just cure all my insecurities through the magic of exercise and diet or some shit like that. Drink more water and do a detox enema once a month and you will never be plagued by poor self image ever again! I'll provide the lube, you just gotta get it up there!

Unfortunately, it's a little more complicated than that. It's a matter of reclaiming your body. Other than to rip up my skin or check my ponytail for bumps, I rarely look in the mirror. I've taken two selfies lately as an attempt to "reclaim" my self confidence. Obviously I had a little set back and I'm not super surprised by it when I sit down and really think about it. Halloween is always a hard time for me and if I'm resorting to wearing foundation, it means I really don't feel good about myself. Not to mention how it clogs my pores so badly that no amount of makeup remover ever really gets it all out.

However, the biggest thing to remember with change is that it doesn't happen overnight. It's a process. Some days are harder than others. Setbacks happen. Sometimes, it gets so rough that you just want to pour gasoline all over yourself and light a match. As long as common sense has even the smallest tendril wrapped around you, though, there's always hope.

And yeah, I may be a little hypocritical saying it but goddamnit, you have to love yourself. Unless you've mastered astral projection to the point where you can depart your earthly body, you're damn well stuck in this soul shell until the day you die. With any luck, that'll take a while so in the meantime why not enjoy what you've got?

After all, despite the skin issues I have, I'm still beautiful. I have fabulous, strong, shiny hair that happens to be the shade I dreamt of having for years and years as a little girl. My eyes are a phenomenal shade of blue, like the sky right before a wicked storm rolls in from the shore. The wonderfully unique smile I have took most of my life to enjoy but now I can appreciate it's infectiousness as well as my lips' wonderfully curved cupid's bow accentuating it.

As for the inside, I'm a wicked fast learner and courageous in the face of everything that terrifies me. I'm a violently loyal friend, expert secret keeper and give excellent advice. I'm good at admitting when I'm wrong and even better at saying "thank you". All in all, the world is a better place because I'm in it. And you know what? The same goes for you.

No one I know has a lot of spare time but now is a good moment to sit and truly think on the good things about yourself. It'd be nice if we could all squeeze in a couple minutes looking in the mirror in the morning, saying pleasant affirmations and shielding our souls in preparation for the day but life is hectic and habits are hard to form. So do it now. Appreciate what you have while you've still got it. After all, we're not going to be this age forever - or alive, even. So why squander this tiny little blip in the grand scheme of humanity by putting down the only self we're certain we will have?

It's all a matter of perspective. It's worthwhile to try to look up and enjoy the view while we can.
Posted by Carly Kaxt at 01:59