Making some sort of "public statement" about something I'm sure basically no one cares about is a little on the stranger side of things I've done in my life yet I feel the need to say something. For those of you who follow Ladylike Gaming, I wanted you to hear it from me first that I have decided to no longer be a part of LLG.

If you read my last post (if you haven't, you can find it here), you would know that my recent focus has been on setting boundaries and maintaining openness about how I really feel about things. It's hard to do this though when you know the things you say, the choices you make, have a large impact on the emotional well-being of others.

Sometime during 2015, I decided to take out a credit card under my husband's name and buy an El Gato so Cassandra and I could stream a drinking game we played and called it GTA Friveday. It was a stupid amount of fun and honestly, I don't think I will ever have as much fun again as the two of us did, drinking orange juice and tequila and cracking jokes about butts and boners.

The January of 2016, we made our official debut on YouTube as Ladylike Gaming, with the most perfect and brilliant channel trailer possible. We were all high hopes and big dreams, dreaming of the YouTube big leagues.

Throughout my time with the ladies, we've made some truly excellent videos and some not-so-amazing content. We began to transition to Twitch, streaming more often instead of purely uploading videos on YouTube. As time passed, we became more efficient, more professional, more consistent. On the flip side, I found myself more stressed, more unhappy and more lost.

Our mission when we set out was to create a safe space on the internet for gamers of all genders, sexual orientations, races, etc, to come together and watch funny, adult oriented content that didn't go for the cheap jokes at the expense of others. Unless it was at our own expense, of course. As I once said, I play games for fun - I make fun of Caitlyn professionally.

While Ladylike Gaming hasn't lost sight of this core value, I began to feel like I did. I began to felt trapped in the games, the schedule, the grind. Rush home from work, stream, sleep, repeat. Adding in a very intense day job and I found myself so stressed I could barely function.

It's been a full week since I told the ladies I was leaving, and since I wrote the first half of this post.

The moral of the story is the person you're responsible for taking care of is yourself. Try your best but don't burn yourself out so hard that you freak out and starting getting all suicidal intentions on yourself.

I still love and 100% support the ladies of LLG. If the door remained opened, maybe I would film some stuff with them or collaborate. The reality right now however is that I need to focus my attention elsewhere in my life.

See ya in Hell,
carlykaxt 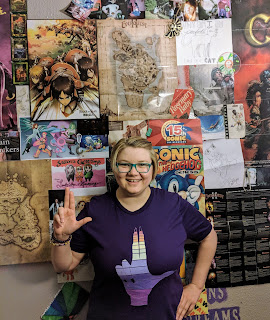