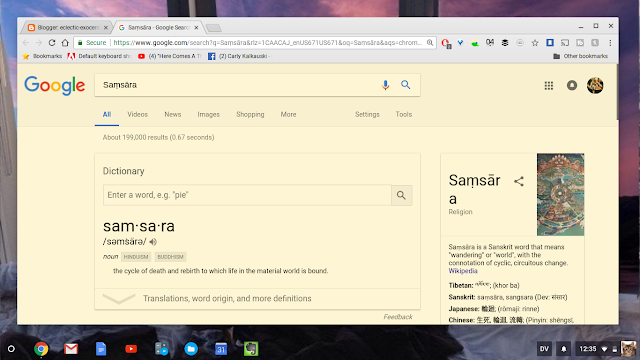 Sometimes, my mind gets so wound up that I just can't sleep. And for the first time in a really long time, I'm actually in a place where that's not a problem. Hopefully I'm not bothering those trying to sleep with the gentle tapping of my keyboard, the occasional unwrapping of a piece of chocolate. No bag of sweets is ever safe in plain sight with me around.

I clasped her by the shoulders, looked her dead in the eye and very solemnly responded, "I have been here for the perfect amount of time."

This is a sentiment that I have expressed before, when I quit my job at the hotel. It was said to my then-boyfriend as we went for a smoke cruise. I was complaining about how much I hated that job, hated this town, hated how trapped and suffocated I felt. Then I realized that if I had my way and left by now however, I wouldn't have gotten to know him. Peeking at him as I watched the road, a smile caressed my lips as I said this to him. It still seems to be true.

He inspired me to stop ignoring what my heart was telling me and take the leap, even though I was terrified. If it wasn't for him and that incredible shit show of a situation, I wouldn't be where I am right now.

It's funny how dating someone else can enrich your marriage. Go figure. Someday I'll go into this thought process a little bit more because the whole thing is pretty interesting but that's not what we're here to discuss.

Maybe the best way to express the place in my life that I'm currently residing in is to show some good ol' screencaps. After all, who am I more straightforward and honest with than my BFFFs? (hint: the extra F is "fucking") 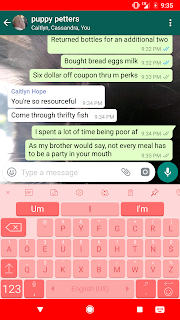 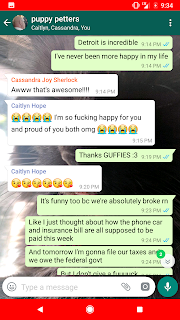 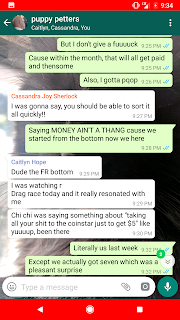 I remember being homeless, being hungry, being so fucking desperate for new clothes or shoes but gritting my teeth and baring it because I didn't have a choice. And after years of clawing and scraping and fighting, through the unbelievable kindness of our friends and Nicholas' utter determination, that might genuinely become a thing of the past. Assuming everything works out, we could - dare I say it? - pay off all our debt. Get a vehicle under 200,000 miles that doesn't have new strange sounds pop up every week. Eat healthy things instead of copious amounts of bread bc bread is cheap af. Eventually, once we're caught up, we might even buy things with our newly discovered expendable income.

The whole thing simultaneously seems completely unreal and perfectly natural. Humans are funny, how we nestle right into our little roles and accept an entirely new environment as if we've been here all along. At the same time though, this just, makes sense. Don't get me wrong, the strong independent woman who's sang along to every damn song about paying your own bills side of myself is thoroughly nauseated by the very real fact that I am currently a "kept woman". But the truth of the matter is that Nicholas and I know it's all about taking turns. We're in this for the long haul and once we settle back down and he's going to pilot school, it'll be my time to make some dough. Told you we're all about the bread around here.

Of course, the dream is that with this newly allotted free time (an intensely foreign concept to me), that I'll "make my brand". You know, videos. Art. Music. This blog. Connect with people, actually speak to people who can see themselves in my struggles and hopefully touch something inside of them that makes them feel like they're not alone. No shit I'd like to earn some income doing this, after all, food and general life necessities aren't free, but that's really not the point.

I've felt this deep, intense NEED to create and connect through my art since... forever, really. Writing has always been my strong suit, my go-to, but a lifelong fixation on the medium of video will not be satiated until I give it a true go at crafting the content I've always dreamed of making. Different formats of art are like foreign languages - as long as they're all Latin based, you've already got a leg up.

I can tell my tiredness is making my brain run away from me. I suppose this is sort of my "status update" or "shit is happening" post. The cycle begins anew and I'm reborn, a passionate soul crying for meaningful metamorphosis. Let us hope that I can keep a grip on my mental health and begin a genuine pursuit of happiness. After all, my only obstacle now is myself.
Posted by Carly Kaxt at 01:04